This Tree Is A Testimony 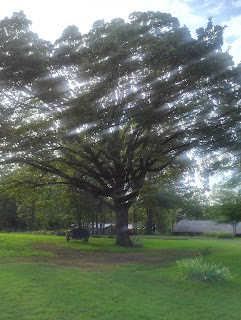 This beautiful tree with its gorgeous limbs and the light through it leaves has a dynamic story. Let me tell you about it, and the man who's confession never wavered and eventually came true.

In April of 1979, 34 years ago, Doyle and Marlene Turley and 13 other families bought a huge tract of land near Lake Tenkiller, outside of Tahlequah, OK. All of these families grew up on the west side of Tulsa, or were family members of someone from the west side. They created the Westside Country Club on this purchased land. As often as they could, they would come from Tulsa for the weekend to this heavenly piece of property, until they eventually were able to retire here.

At the beginning, the piece of property around this tree was the only open space on the entire tract of land, all the rest was forest. So they would come and camp around this tree and plot out and clear the rest of the land. They sectioned off the land among the 14 families, created roads, and a covenant.

This tree was somewhat sickly. It was about 10-feet tall, split into two parts, and had an ugly, deep hole about 3-feet long on one side. Everyone would say, "This tree will die." "Let's cut it down." "This tree isn't going to make it.", etc. But Doyle Turley would always say, "This tree won't die. It's going to live."

So Doyle filled the hole with that expandable foam that comes out of spray cans for filling up cracks, etc., in walls and house trim. (It took a lot of the foam.) Then he sealed it over, and sprayed it every year. All the time, the others would say, "This tree won't make it."

The picture at the bottom of this article is the tree 34 years later. It is in the middle of the property, and the pride of the whole Country Club. (My own granddaughters would love to climb it, but are too small.) And never once has Doyle ever said, "I told you so." The picture also includes in it my wife, Judy, so you can see how big it is.

There is something to say about the importance of confession, and sticking with it. It may take months for your life to show the results of the confession, but if you hang in there, it will. I am thankful that God gives us such a powerful tool as confession. I am alive today because of it. I believe what God says about me, and I continually speak it out. My circumstances eventually catch up.

Paul says, in Hebrews 4:14, "Seeing then that we have a great High Priest who has passed through the heavens, Jesus the Son of God, let us hold fast our confession." And again, in Hebrews 10:23, "Let us hold fast the confession of our hope without wavering, for He who promised is faithful." 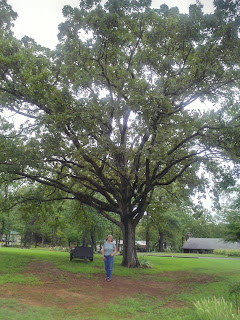