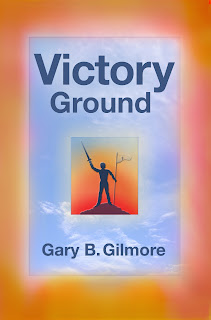 My wife states: "This book reveals that from the day a person accepts Jesus as Savior, that person is placed on Victory Ground! The outcome of every battle and every trial has already been won. In light of that truth, this book shows how to enjoy this victory which was not earned, but given to us as part of our salvation."

I know you will enjoy it. I have made it easy to read and full of encouragement for even the newest Believer. So many older Christians have thanked me for this book, stating that they have never heard it like this before.

And if you buy and read, I would so appreciate you writing a review on Amazon at the same page where you viewed the book (click on the link above, go down to Customer Reviews).

Are you holy? Right now you are probably flinching, withdrawing from the question. Certainly, if you are like the great majority of mankind, you are saying or thinking, "No! Of course not." You know you should be because you are encouraged to be "holy, for God is holy" (1 Peter 1:16). But you know you aren't because you sin, don't pray enough, curse, drink, smoke, don't go to church, etc. You intend to quit all those things, and start living right....but...

If you have asked Jesus into your heart, according to the Bible, you are holy. The problem is, you believe the religious idea of what holy is, instead of the Bible truth. And because of that, you live a life of conviction and defeat, and you try to cover it up or get away from it, so you can have some kind of peace.

OK, let's look at this thing called holy. The Greek word (which is the language in which the New Testament was written) for holy is hagios (don't worry about pronunciation). In it's purest sense, it means "set apart." If I were to invite you to dinner, and seat you at my table, there would be a plate, a glass, and some tableware in front of you. Understanding this Greek word, I would say that those items are holy to you. In other words, they are for your use at that meal. Don't worry, I have my own set, as does everyone at the table. We won't take yours. Why? Because they are set apart for your use.

That is what holy means! Something or someone set apart for another's use. So when God says He is holy, He is telling you that He has set Himself apart for your benefit. And He asks you to be holy like He is, set apart for His benefit. Of course, your can't do that. That is why Jesus died on Calvary and rose again on the third day, and gave you His Holy Spirit: so you could be holy. "Not by works of righteousness which we have done, but according to His mercy, He saved us, by the washing of regeneration, and renewing (making holy) of the Holy Ghost" (Titus 3:5).

What Christ did was set you apart for His benefit. When you ask Him into your heart, you become holy. Now all you have to do is act like it. We say to someone, "Be a man!" or "Man up!" And we only say it because the person can. The Bible tells us to be (act) holy, and it only says that because we can. With the help of the Holy Spirit. So...be holy. And when someone asks you, "Are you holy?" Just say, "Yes!"

By the way, there are a number of words we use that are forms of this Greek word holy.
The adjective (which requires a state of being verb) is holy.
The noun is saint.
The verb to make holy is sanctify.
The place where holy people gather is a sanctuary.
All these words are the same word in the Greek - hagios with a different ending to make them an adjective, verb, noun, adverb, etc.
Posted by Gary at 12:31 PM No comments: